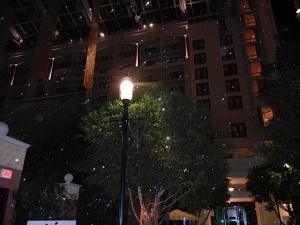 “Can anybody find me somebody to love?” -Freddie Mercury

“It has been within this context that God has been ‘saving’ me.  It’s not so much that I bring the hands and feet of Jesus to those in need, but in the going, I often find he is already there.  And in this context, he is reshaping my heart, transforming my thinking, and re-ordering my priorities…in ways that I hope are his heart, his thinking, and his priorities.”

Early evening on a damp, snowy street in downtown St. Louis, Roy sat under the acrylic canopy of a bus stop as cloaked and gloved pedestrians scuttled by. A roundish black man of about 50-years-old with a long, scraggly, peppered beard, he was layered in clothing covered by a worn, blue nylon coat. On his head, he wore a loose-knitted beanie with a yarned ball on top. His bare hands fuddled with his belongings consisting of a small backpack, papers, and empty food containers that were spread across the bench in an apparent claim of territory and a warning to stay away.   I held out a warm cup of coffee, apologized for my pretentiousness, and asked if he would receive it.

Roy’s suspicious eyes fell over me. I saw speckles of food stuck in the front of his beard below his mouth. With his tongue filling the gap of missing upper teeth, he said, “Sure,” and held out a dry, cracked hand. I took a seat at the far end of the bench not claimed by Roy’s possessions and sat quietly watching the large snow flakes float softly to the street in front. Roy rummaged through his backpack and pulled out a small pint of Vodka. He paused before pouring some in his coffee and held out the bottle to me. I graciously declined.

“It’s beautiful snow tonight,” I said. “We don’t get this where I live in California.” Roy looked up at the snow, then his eyes met mine. That began an hour-long conversation in which Roy shared about his “many lives.” He told me he came to St. Louis in 1805, that he came by boat up the Mississippi from Louisiana, that he once was an Iroquois Indian and a Chippewa Indian, that he had been married many times and had many children, that the father of his last wife shot and killed him, that he cannot die because he keeps coming back as different people, that the food at the local shelter was “garbage,” and that he does not sleep indoors but has a place to get out of the weather at night. Roy spoke with a grunty, gnarled voice, and he often paused to yell at some unseen person or persons in the street in front of us. It also seemed as if someone else was speaking out of Roy, a quieter, more timid voice. It would answer after each rant at the unseen irritating unknowns. I was, as if, eavesdropping on Smeagol and Gollum.

I asked about his gloveless hands. He produced one gardening glove from his backpack and said someone had stolen the other one. I had to leave for a convention event and asked if he would be around in about an hour so I could return with a warm meal. He said he’d be there. I took hold of his dry, weathered hand, and again his eyes met mine. This time, the suspicion was gone.

I returned later with a meal, a blanket, some gloves, a scarf, and two beanies, but Roy was not at the bus stop. I walked the streets in several directions searching but did not find him. I returned to the bus stop and left the items on the bench. Later that evening, they were gone.

Roy is a caricature of the homeless, hurt, and broken in a city or neighborhood near each of us- alone, ignored, discounted, often with addictions, mental illnesses, and depressions, often without friends, without hope.

A few blocks away in St. Louis that night, 16,000 people were gathered to pray, worship, and learn about serving others around the world. Roy was just a few hundred yards away. Over 4,000 of these 16,000 pledged to find, befriend, and bring Living Hope to the “Roys” in their neighborhoods and to the ends of the Earth. Will you consider joining them?

This meeting with Roy took place in late December 2012, and I wrote the above shortly after.  This was a period when God was awakening in me a growing awareness to the reality of His presence, goodness, and love for us…an invitation to enter deeper in.

I did not really know what to do.  It was awkward…and often still is.  But things resonated within…conventional wisdom began to give way to spiritual realities…fears faded to faith.  Simple connection.  Respect.  Value.  Sincere interest.  Commitment.  Time.  Relationship…Community…God’s salvation and love.

It has been within this context that God has been “saving” me.  It’s not so much that I bring the hands and feet of Jesus to those in need, but in the going, I often find he is already there.  And in this context, he is reshaping my heart, transforming my thinking, and re-ordering my priorities…in ways that I hope are his heart, his thinking, and his priorities.

The encouragement, I hope, you may find in this is to “begin” or “continue” to respond to that “voice” inside, that “nudge,” that “pull”…towards compassion and engaging those who are in need, poor, orphaned, wounded, oppressed…and to let it have it’s way with you.  It may feel awkward, uncomfortable, even embarrassing…at  first.  Stick with it.  Keep coming back.  I think you will find Jesus is there…and there is no pressure to make something happen or to “save” someone.  God will do the work.  And you may just find that it is you he is “saving.”

“Many people who are evidently genuine Christians do not demonstrate much concern for the poor.  How do we account for that?  I would like to believe that a heart for the poor ‘sleeps’ down in a Christian’s soul until it is awakened.”